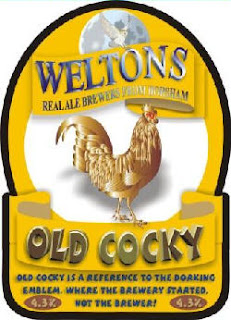 Plus a hearty sup of this 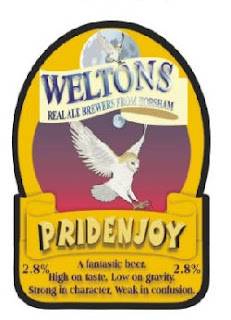 This is one of the perks of being a morris dancer and in my case, it brings a whole host of loves together in one package- dancing [not awfully good at yet], live folk music and best of all real ale [very good at!] We were invited to dance at a local microbrewery called Welton's yesterday. They have several regular cask ales but they also launch regular monthly lines...at the moment they have one called King or Queen as it's awaiting the imminent arrival of the new baby before they can finally announce its name. Although, I wasn't in charge of the metal box with a wheel at each corner yesterday, I did taste their latest brew called Top Dog- it's only 1% but is a super tasting beer and I think you would think it a much higher alcohol content from that alone.

For many years our town had its own brewery and chain of pubs, but sadly it was disbanded a while ago and the operation was moved down to Dorset. It wasn't one of the big boys muscling in nor was it an aggressive takeover. Many lost their jobs and it looked to be the end of our local association with brewing, but I am thankful to report that several small phoenixes rose from the ashes in the forms of 4 or 5 local microbreweries, some of which were set up by the some of the original brewers so now we have some fantastic brews to choose from. Naturally as morris dancers we are offered a free pint or two and having been brought up to think it would be rude to refuse I don't unless I am driving. If anything like yesterday was to go by though I'm not entirely sure it improves my dancing ability!!