Incredible experience and I danced everything pretty much okish huzzah!! I'll put up some other non dancing photos in another post shortly, but for now I shall inflict a few Morrisy ones to give you a flavour of some of the sides we were dancing with- it's organised so that you and the other sides dance a couple each before processing [call that nattering and ambling- too hot to for any extra dancing yesterday in full tatters thank ye!] to the next stand. The procession was led by John Barleycorn 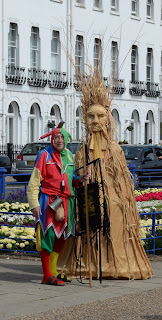 Firstly the extraordinary Pentacle Drummers- if you like tribal drumming do google them they are just incredible. There are loads of them there- these are just the three who lead it [I think] 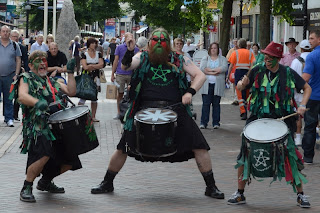 Next Hunter's Moon, like the Pentacle Drummers, another brilliant local side. They always wear black and silver and blacken their faces. This traditionally [there are many theories as to how Border morris originated] comes from the time when the poor who worked the land would demand money for menaces- they would disguise their faces so they would not be recognised. The tatters we now wear supposedly represent the jackets the original dancers wore- they would have turned their jackets inside out and shown their ripped linings. 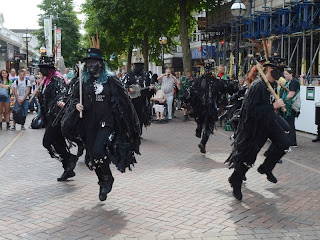 Gong Scourers side- these were the medieval chaps who cleared the privvies and sluiced the drains in the castles. Each would have had an oak spade to make his job easier. They operated at night so that they were out of sight of the lord and lady. Average life expectancy was 27 due to the diseases caught from the faeces. 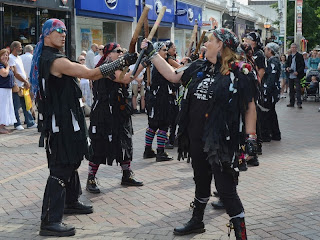 I have nominated this chap as the Johnny Depp of the Morris World!

He is part of a recently formed side called Steam Punk Morris. They have a huge following and gorgeous costumes as you can see below. If Morris dancing should ever become cool this will be the side to lead the way! 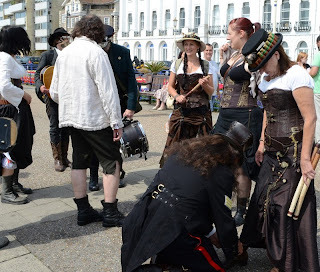 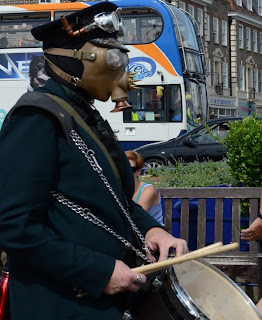 And just to prove that I really was there in my newly finished tatters jacket [making my own mask is next on the list] I am the one in the silver mask. I am plucking up the courage to buy a pair of New Rock shoes..... 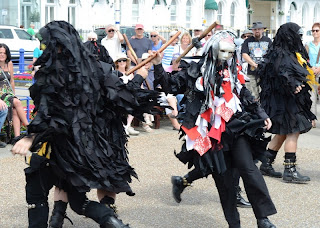 And this one's for Kim....it was amazeballs!